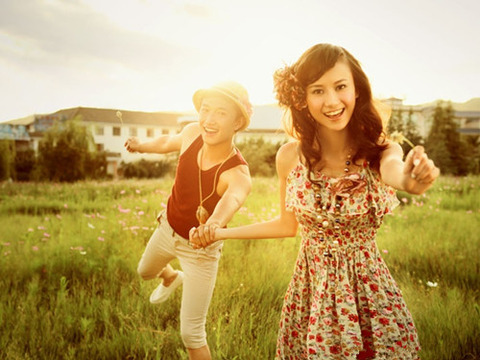 Located in the checkroom in Union Station as I am, I see everybody that comes up the stairs.

Harry came in a little over three years ago and waited at the head of the stairs for the passengers from the 9∶05 train.

I remember seeing Harry that first evening. He wasn’t much more than a thin, anxious kid then. He was all dressed up and I knew he was meeting his girl and that they would be married twenty minutes after she arrived.

Well, the passengers came up and I had to get busy. I didn’t look toward the stairs again until nearly time for the 9∶18 and I was very surprised to see that the young fellow was still there.

She didn’t come on the 9∶18 either, nor on the 9∶40, and when the passengers from the 10∶02 had all arrived and left, Harry was looking pretty desperate. Pretty soon he came close to my window so I called out and asked him what she looked like.

"She’s small and dark," he said, "and nineteen years old and very neat in the way she walks. She has a face," he said, thinking a minute, "that has lots of spirit. I mean she can get mad but she never stays mad for long, and her eyebrows come to a little point in the middle. She’s got a brown fur, but maybe she isn’t wearing it."

He showed me the telegram he’d received: ARRIVE THURSDAY. MEET ME STATION. LOVE LOVE LOVE LOVE. MAY. It was from Omaha, Nebraska.

"Well," I finally said, "why don’t you phone to your home? She’s probably called there if she got in ahead of you."

He gave me a sick look. "I’ve only been in town two days. We were going to meet and then drive down South where I’ve got a job. She hasn’t any address for me." He touched the telegram.

When I came on duty the next day he was still there and came over as soon as he saw me.

"Did she work anywhere?" I asked.

He nodded. "She was a typist. I telegraphed her former boss. All they know is that she left her job to get married."

Harry met every train for the next three or four days. Of course, the railroad lines made a routine checkup and the police looked into the case. But nobody was any real help. I could see that they all figured that May had simply played a trick on2 him. But I never believed that, somehow.

One day, after about two weeks, Harry and I were talking and I told him about my theory. "If you’ll just wait long enough," I said, "you’ll see her coming up those stairs some day." He turned and looked at the stairs as though he had never seen them before.

The next day when I came to work Harry was behind the counter of Tony’s magazine stand. He looked at me rather sheepishly and said, "Well, I had to get a job somewhere, didn’t I?"

So he began to work as a clerk for Tony. We never spoke of May anymore and neither of us ever mentioned my theory. But I noticed that Harry always saw every person who came up the stairs.

Toward the end of the year Tony was killed in some argument over gambling, and Tony’s widow left Harry in complete charge of the magazine stand. And when she got married again some time later, Harry bought the stand from her. He borrowed money and installed a soda fountain and pretty soon he had a very nice little business.

Then came yesterday. I heard a cry and a lot of things falling. The cry was from Harry and the things falling were a lot of dolls and other things which he had upset while he was jumping over the counter. He ran across and grabbed a girl not ten feet from my window. She was small and dark and her eyebrows came to a little point in the middle.

For a while they just hung there to each other laughing and crying and saying things without meaning. She’d say a few words like, "It was the bus station I meant" and he’d kiss her speechless and tell her the many things he had done to find her. What apparently had happeded three years before was that May had come by bus, not by train, and in her telegram she meant "bus station," not "railroad station." She had waited at the bus station for days and had spent all her money trying to find Harry. Finally she got a job typing.

"What?" said Harry. "Have you been working in town? All the time?"

"Well, Heavens. Didn’t you ever come down here to the station?" He pointed across to his magazine stand. "I’ve been there all the time. I own it. I’ve watched everybody that came up the stairs."

She began to look a little pale. Pretty soon she looked over at the stairs and said in a weak voice, "I never came up the stairs before. You see, I went out of town yesterday on a short business trip. Oh, Harry!" Then she threw her arms around his neck and really began to cry.

After a minute she backed away and pointed very stiffly toward the north end of the station. "Harry, for three years, for three solid years, I’ve been right over there working right in this very station, typing, in the office of the stationmaster."